On October 22nd, the Church celebrates the feast of St. John Paul II. Like many others, we have been reflecting on his life and legacy, on the global impact of his words and actions.  The stories,

writings, photographs, videos by and about him are almost limitless.  Above this whole body of work, one overarching theme stands out more clearly for me than ever before: he was always the champion of the dignity of the human person.

Early on, young Karol Wojtyla identified the problem with the modern culture as a basic lack of understanding of the human person. Later, he set out to fill that gap by providing what he called an “adequate anthropology” in the Theology of the Body. In short, TOB is a study on the human person answering the perennial questions “Who am I?” “Why am I here?” “Where am I going?”

In one of his many writings on this topic, in the Theology of the Body (TOB) the Pope goes back to the beginning demonstrating how man’s unique, inherent value is established in Creation. “God created mankind in his image; in the image of God he created them; male and female he created them.” (Gen 1:27). Created in God’s image, man is set apart from the animals with the unique ability to think, choose, and love.

Man’s inherent dignity is rooted in being created in God’s image, body and soul, and called to love. St. John Paul II expands on this in his Letter to Families, 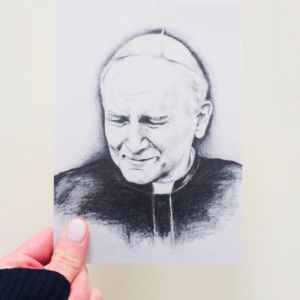 “Human beings are not the same thing as the images proposed in advertising and shown by the modern mass media. They are much more, in their physical and psychic unity, as composites of soul and body, as persons. They are much more because of their vocation to love, which introduces them as male and female into the realm of the ‘great mystery’”. (LF 20)

The Theology of the Body is perhaps even more important today than when the Holy Father began delivering his Wednesday Audiences in 1979. Today’s cultural confusion surrounding the meaning and purpose of the human person begs for evangelization on the dignity of the human person.

I think we all wish that he was still with us today to guide us through this increasingly disturbing world. But he has already given us everything that we truly need from him.  A model of faith, hope and love.  A devotion to Mother Church.  And an adequate anthropology of what it means to be human – The Theology of the Body.

What remains is for each of us to take up his mission and transform ourselves into new champions of the dignity of the human person.  And together become evangelists to build a “culture of life and a civilization of love”.