Blessed Are the Peacemakers 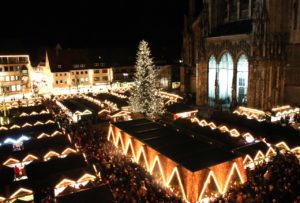 It was a typical Christmas Eve. My eleven siblings and I were crammed into one Church pew, mingled with in-laws as well as nieces and nephews (I never understood why it was constantly insisted upon that we make one pew work. Did my parents not know that it contributed to the bickering and fighting at Mass? Seems to be a problem only large Catholic families deal with…). The rest of the Church was packed as well. However, as I would look with longing eyes, it boggled my mind how there was always a few seats open in the pew right in front of us.

Lay Down Your Sword 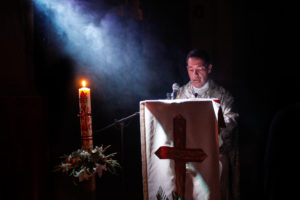 Amidst this particular Mass, I remember the homily, which calmed my nerves and opened my eyes to an even greater reality. “On Christmas Eve, about a hundred years ago” the priest began, “soldiers laid in trenches, on a dark, cold night.” Intrigued as he instantly caught my attention, I listened intently as he continued, “it was 1914, and the world was in the middle of the First World War.” He went on to speak of the violence that had occurred which the world had never seen, but on this one fateful and glorious eve — everything changed. “For a moment, there was nothing but utter silence. A song was heard that broke the void as a German soldier began to sing, ‘Silent Night, Holy Night…’. Moved by his voice, other soldiers slowly joined in — some in French, others in English. And before long, guns were set down and the men actually left their posts, coming together in unison. They forgot about their strife, and continued to sing, exchange cigars, and even embrace one another with the greeting, ‘Merry Christmas’. A true Christmas miracle.”

As anyone might imagine, this homily was so moving for a teenage boy who did not yet understand that even in the midst of war — communion is possible. As the priest concluded, he was sure to draw the connection between the war and the birth of our Lord Jesus Christ. He said that the same is true today. In the midst of so much turmoil and division, on a cold, dark, but silent and holy night, the Savior was born of a virgin, in order to bring peace to all mankind.

“Come, Let Us Adore Him” 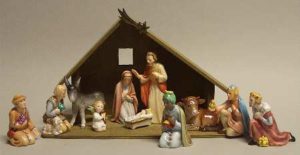 In this same spirit, I encourage all families, schools, and parishes to inspire their members with desire of spending a few quiet moments in front of a Nativity scene. With the youth, guiding them in a meditation that draws them into the manager with our Lady and St. Joseph. Allowing them to hold the Christ child, or to touch the other figurines. Repeating this experience multiple times throughout the Advent and Christmas seasons. And for those who are “older and wiser,” I would like to invite you to literally sit or kneel in front of our Lord’s crib. Beholding the mystery that is often overlooked or taken for granted. “What child is this?,” you might ask yourself. “Who is this God that became man?”

In addition, a practice my mother taught me as a child, was that God delights in my “good deeds” (even more than Santa Claus). She would tell me how I could make the manger softer for baby Jesus by doing acts of kindness. Consider teaching a youth in your life the same thing, by making or purchasing a little manger, and cutting yarn for them to add to the crib whenever they do a charitable work. 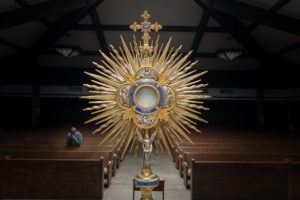 A Story for Our Time

As 2020 approaches its end, I pray that we will allow the true meaning of Advent and Christmas to transform our world, our families, and our homes. Despite the “war waging around us,” may we exercise “the peace of the interior gaze” that Pope St. John Paul II speaks of, “which creates precisely the fullness of the intimacy of persons”. (General Audience 1/2/80) In so doing, may we prepare a place for Christ in our hearts, so that we can encounter him and more adequately make him visible to others “in and through our bodies”.