Ever Heard of a BHAG?

Ever heard of a BHAG? A Big Hairy Audacious Goal? It’s a concept coined by Jim Collins in his classic book Good to Great: Why Some Companies Make the Leap…and Others

Don’t. A big hairy audacious goal, or BHAG, is a clear and compelling target for an organization to strive for.

Microsoft built an empire around the BHAG, “A computer on every desk and in every home, running Microsoft.” Now, how absurd that must have sounded 40, 50 years ago, yes? What do you think of that in the year 2020? Not only is there A computer on every desk, but people own MULTIPLE computers. There’s a computer in every purse, pocket or portfolio…it’s called a cell phone, a tablet or an iPad and the majority run Microsoft. Whoda thunk! There’s nothing like a BIG WHY to keep you attentive, passionate and laser focused with the trajectory of your work to CRUSH that goal. 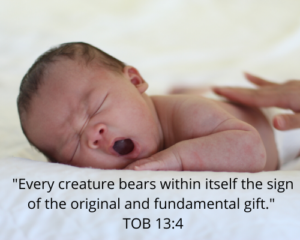 The BHAG for Ruah Woods is this: “Every eye sees every body as a person and every person as a gift.” Sounds outlandish, especially today when there are cities burning from riots or Covid infected seniors placed in nursing homes to “recover” all the while infecting their fellow vulnerable residents, or people who hate their bodies so much they feel compelled to permanently, surgically change them and oblige everyone else to uphold the charade including a Supreme Court that enshrines that idea as the law of the land, or finally, millions who fail to receive the gift and expel the “contents of conception” from their bodies as merely so much nuisance needing to be gotten rid of or a choice to be made.

What if, in each case, everyone saw every body as a person and every person as a gift? Stop a minute and think about that. How. Might. This. World. Be. Different?

Our Bodies Tell God’s Story: Discovering the Divine Plan for Love, Sex, and Gender is Christopher West’s latest installment appealing to the rest of us to WAKE UP AND SMELL 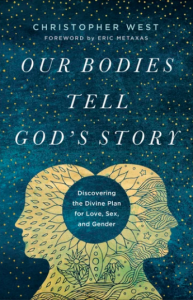 THE COFFEE!!! This time he’s written an appeal with a Protestant audience in mind to explain JPII’s revolutionary teaching on Theology of the Body. His profoundly placed prose precisely finds that sweet spot to help the reader to actually feel the resonance of his message.

I’m telling you, you vibrate when you read this book! Its truth (or rather JPII’s TOB) pierces you to the core. That echo of God’s original plan for us is still inside of us reverberating, reminiscing, remembering, repeating! It reminds the reader that we are all gift given by the Supreme Giver of all gifts who loves us like no other.

With each new book West finds new, nuanced ways to paint the picture to answer the foundational questions of “Who am I and what am I doing here on this earth at this time in this place? What are my God given gifts and talents and what is the mission for which they were deployed? Our founder, Tony Maas has a saying, (which half the time, he charmingly gets backwards when he says it), “Bloom where you’re planted.”

Our Bodies Tell God’s Story was the featured book in a recent Ruah Woods online book discussion group. Here is what some of the participants said. Anne comments,

“Having done a little study of TOB already, I was eager to read Our Bodies Tell God’s Story because it is written for non-Catholic readers. Frankly, I was more interested in finding out if it was something to share with my Catholic friends and children who are new to TOB. I was not disappointed. This would make an excellent initial foray into the main concepts of St. John Paul II’s great teaching; it wasn’t overwhelming intellectually, which makes it accessible to many. Where I was overwhelmed — happily — was in how absolutely packed nearly every sentence is with nuggets of deep and beautiful truths! I’ve never highlighted so many passages in a book. While this may be an easy read when it comes to TOB, it is not a quick read!  You will want to read and reread many inspiring passages.”

“Christopher West has added another amazing book to his catalog. The book is short, but jammed full of information about Pope John Paul II’s Theology of the Body (TOB). Even having quite a bit of exposure already to TOB, this book still provided new insights, new ways of thinking about this subject. Explanations are deep but understandable, written in a friendly, informal manner, with many pithy, memorable adages that are perfect for conveying the basic tenets of TOB. Everyone in my book club had half the book highlighted!” 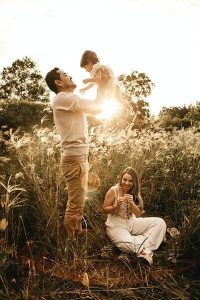 Theology of the Body is the stuff of the New Evangelization. Do you want to stop helplessly, wringing your hands over the mess the world is in? Then GET ON BOARD! We need a fully equipped Special Ops Team to teach the world so that every eye sees every body as a person and every person as a gift. Just imagine the transformation that can happen!

Only then will our cities stop burning, our seniors be revered, created as male or female be considered a task to be lived out well and our children be welcomed as a gift given by the Supreme giver of gifts who loves us unto death…death on a cross to give us eternal life.

Note: Our next book is Hope to Die: The Christian Meaning of Death and the Resurrection of the Body by Scott Hahn and Emily Stimpson Chapman. Join the conversation on ZOOM. Click here for info and registration.