Sacred Spaces Should Be Our “Safe Spaces” 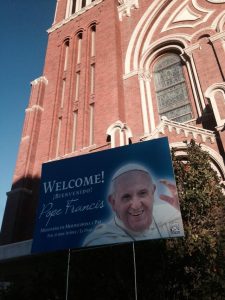 In February of 2016, Pope Francis made a rare visit to the border towns of Ciudad Juarez, Mexico and El Paso, Texas. I was blessed to travel there to assist a friend who was promoting this extraordinary occasion. At the time, my full-time job was as an Associate Director of a pregnancy center where I ministered to hundreds of abortion minded women annually. Traveling for this Papal event was a nice break from the front-line culture of death work at the pregnancy center — but it also reignited a spark in my Catholic heart. Just a few months after this trip, I would be working for Ruah Woods Press promoting TOB around the world.

Last week the memory of my Texas Papal visit came flooding back to me because of two different headline news stories. In mid-August, there were several national articles reporting the vandalizing of El Paso’s St. Patrick’s Cathedral. A life sized ninety-year-old statue of Christ displaying his Sacred Heart was shattered on the 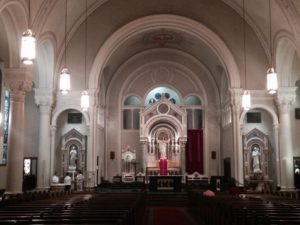 Cathedral floor by a disturbed criminal who was later arrested. Of course, the pastor and parishioners are distraught that this famous and holy symbol of The Cathedral was ruined. They were upset that Christ and His BODY, displaying his merciful and loving heart in this sacred space was so callously destroyed. This crime was part of the increased violence on Catholic churches in the already tumultuous summer of 2020.

“Blessed are you when people insult you, persecute you and falsely say all kinds of evil against you because of me. Rejoice and be glad, because great is your reward in heaven, for in the same way they persecuted the prophets who were before you.”
—Matt 5: 11-12 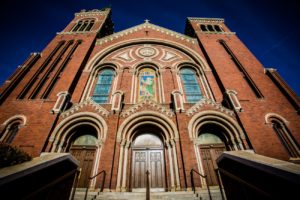 Each morning of my Texas Papal trip, I would walk from my hotel to St. Patrick’s Cathedral. The Mass at St. Patrick’s was so reverent, but also uniquely bilingual, unifying different cultures at this border Diocese. The irony caught me off guard — that in the middle of the desert and in such a largely Hispanic area, the Cathedral was named for an Irish Saint and in this picturesque desert city, the building had a very European feel. This put a smile on my face and in my heart! It was part of the glorious charm of the devout community and truly represented to me the universality of being Catholic and the BODY of Christ.

“The comparison of the Church with the body casts light on the intimate bond between Christ and his Church. Not only is she gathered around 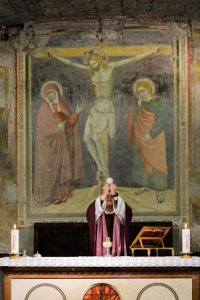 him; she is united in him, in his body. Three aspects of the Church as the Body of Christ are… the unity of all her members with each other as a result of their union with Christ; Christ as head of the Body; and the Church as bride of Christ.” —CCC 789

But there was more. Headlines of the closure of the thirty-six-year-old El Paso abortion clinic in the past week also gave memory of this trip. Praise be to God this facility is closed. Constant prayer vigils and sidewalk presence certainly contributed to this death center shuttering once and for all. There is a vibrant pro-life community in the Diocese of El Paso that support families in untimely pregnancies. The end of death in this building is a victory for Christ and all in this community. The closure of this facility really hits home for me.

That February three years ago, I prayed outside this now closed slaughterhouse and had a stirring encounter while there. One morning, as I was walking back to my hotel after Mass at St. 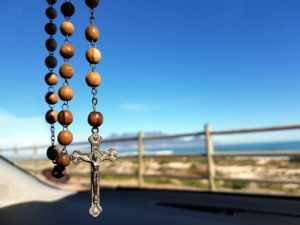 Patrick’s, I took a short detour in this quaint desert city to offer prayers outside the nearby abortion facility. This center of harm and death was located close to a college, it sat unenclosed atop a hill. This building was very different than the barricaded abortion business in my hometown. While I was praying my rosary alone on the sidewalk, I encountered a sorrowful young man slouched on a wall right outside the facility. His back was to me as he buried his face in his hands. As I approached, I said hello as not to startle him, and asked if I could sit down. He was obviously grief stricken and even seemed numb. 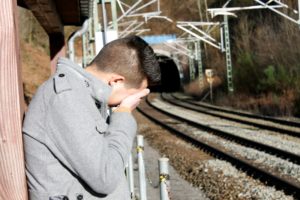 This handsome young man, with the world in front of him, allowed me to sit with him. He explained his “girlfriend” was inside the facility aborting their baby. This unique and unrepeatable young man is now the father of a unique and unrepeatable baby that was not being given a chance to be born. His son or daughter would never know the natural world and experience all that is good and beautiful here on earth. This father was feeling the loss and emotional pain immediately. I prayed for him as we sat close and I shared God’s plan of mercy and love as best I could in this dark moment.

In that instant, having just received the Eucharist, I begged God for mercy on this young man and his girlfriend — as well as for all working in the death center. I begged they would find the Lord and come to know God’s perfect plan for mankind. I begged for an end to abortion and for the culture of death to go back to where it came from. I begged for the laws to change in our country. In an embrace with this young man, I felt the pain of his sorrow. I promised God, for the umpteenth time, to fight for human dignity and the sanctity of life.

As the saying goes, “be careful what you wish for” or in my case, pray to God about. God took my promise and turned it into something beautiful and widespread through my work for Ruah Woods Press. He took my very local job at a pregnancy center and turned it into an opportunity to share human dignity and Christian Anthropology with the world through the lens of Theology of the Body. He took that moment of pain and sorrow with the young man in Texas and ignited that spark in my heart to share the truth of the human person boldly and fiercely.

We are living in a time where the sacred is under attack. The sacred spaces of our Churches, and the sacred space of the womb are damaged and destroyed. What will it take for our great nation to 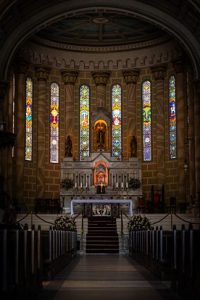 understand freedom and faith? As Pope John Paul II proclaimed, “Freedom consists not in doing what we like, but in having the right to do what we ought.” To do what we “ought” seems so “obvious” to people of faith, but with the attack on our culture, the “obvious” is obscured. The “obvious” is labeled “extreme,” “backward, “flat-earthed” plus much worse. The “obvious” though, to Christians are:  Love and life; Faith and family; Honor and respect. These are what should be as obvious as the nose on our unique and unrepeatable faces.

As we begin October, Respect Life Month on the Church calendar, may we turn to the words of Pope St. John Paul II, the Pope who so boldly rearticulated the dignity of the human person through the lens of Theology of the Body and truly all of his work as Pope.

“We need to bring the Gospel of life to the heart of every man and woman to make it penetrate every part of society. This involves above all proclaiming the core of this Gospel. It is the proclamation of a living God who is close to us, who calls us to profound communion with himself and awakens in us the certain hope of eternal life. It is the affirmation of the inseparable connection between the person, his life and his bodiliness.” —The Gospel of Life